For the past year, I have been working hard to reduce the amount of trash ending up in the landfill, as a result of college football games played at Kinnick Stadium. Located in Iowa City, Iowa, at the University of Iowa, Kinnick Stadium is one of the most famous landmarks in the state. College sports dominate the sports scene in Iowa (since there are no professional teams), and the Iowa Hawkeyes has had a very successful football program the past 30 years. If you are going to make an impact on the environment, and get attention for your efforts, there is no better place to choose than Kinnick Stadium.

When I first heard about the EPA Game Day Challenge, I was excited to see what efforts would take place for the Iowa vs. Michigan game in October of 2011. The few people that showed up handed out some recycling bags and talked to fans, but it was not going to make a noticeable difference in the recycling rate. Nonetheless, this would be the first attempt to gather data on what the actual diversion rate was during a game. Diversion rate is defined as the % of materials that were not put in the landfill, divided by the total amount of material (landfill + recycling). The results came out to 25%, based primarily on the efforts of the cleanup crew, who pick out the plastic bottles from the stands after the game, when they sweep the seats.

The stadium holds over 70,000 fans each game, so even making a few percentages of improvement could make a big difference. To figure out to get a formal project started, I asked around different university departments until I found the people in charge of stadium operations in the Athletics department. They owned the “process,” and if they weren’t interested in doing something different with recycling, I would have been wasting my time moving forward. Luckily, they were interested (although skeptical of what could actually be done). I knew the fans would be on-board because of the progressive nature of Iowa City, but we would need to make it easy, and find some quick wins. I compiled a Project Charter to show the opportunity and the potential cost savings. This ensures we had the right people on-board, and gain some commitment from the leaders in the Athletic department.

We gathered the rest of the interested parties (Sustainability office, Campus Facilities, student organizations, waste hauling company, landfill management, and other interested stakeholders), and setup weekly phone calls to discuss what to do. Since this was the first effort conducted, and we only had one data point, we often look for these “quick wins” or “do it” activities that can greatly improve our results. No fancy statistical analysis needed for this one…

NEW! You can watch a summary of this project with video clips below…

After much discussion and struggling, the team decided on four main improvements for the 2012 season that had minimal effort, but provided the biggest gain.

The improvements led to a doubling of the diversion rate, with an average diversion rate of 51.5% for the seven home games, and a high of 61.6% against Penn State. In total, 47,644 pounds of trash was diverted from the landfill during 2012 season. In addition, a commitment was made by a fraternity on campus to support the pregame volunteering at every home game. They also plan to take a more active role in the following season, so we can have some long-term sustainable options (since I can’t be there to lead it every year).

There was also a waste sort (dumpster dive) conducted after one of the games, to determine how much opportunity there was in the trash containers. The results of the waste sort showed that about 33% of the trash thrown away by the fans could have been recycled. Another 33% of the trash was compostable, but the current setup does not allow post-consumer composting.  The remaining 33% was trash, and was correctly thrown away.

Here is a graphical summary of the results (click to enlarge).

Overall, the project was fairly time-consuming, but also very rewarding and deemed a big success. We received lots of publicity and media exposure for the effort. It’s not often that you can promote recycling to over 70,000 people in a single day!

We were able to increase the waste diversion rate from 25% to 50% through the improvements we made!

Has anyone else been involved in an effort like this at a major sports or music event? What went well (or not so well)? If you’d like more details, please feel free to contact us. 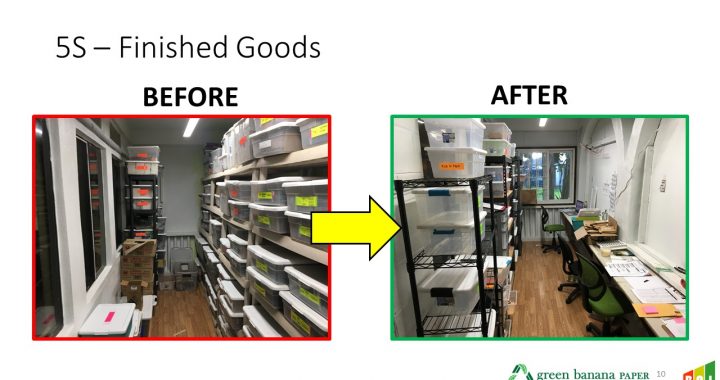 "...33% of our [managers] bonus is based on environmental targets, and another 33% on safety targets, and the other 33% on quality targets, so it does motivate"
- Denise Coogan, Subaru of Indiana Automotive, from Subaru's Path To Zero Waste

E078: Importance of Leadership Systems for Improving Nonprofits and Government