While watching my Iowa Hawkeyes finish off an incredible football season, I began to think about how much trash gets generated at a sporting event. Although I realize that the 70,000 people who attend the games were probably going to generate “some” amount of trash that day, even if they didn’t go to a game, there is still a lot that a university can do to minimize the amount of trash they create, and what happens to it after the game is over.

While in high school in Iowa City, all fall sports athletes were required to arrive at 7am on Sunday morning to clean the stadium after a home game. The university donated the money we raised to the athletic programs of each high school. If enough people showed up (usually 200-500 people), it could be fully cleaned in under 2 hours. It’s a win-win for all parties!

I started thinking back to those days, and how the process worked, so I decided to check to see if things have changed much since I last participated. 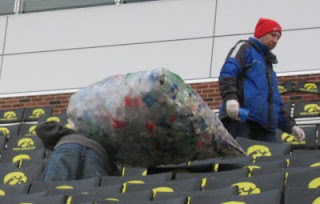 When we arrived, we were happy to see that they were handing out special bags just for bottles. However, instead of using paper cups and dispensing soda from the fountain machine, they seemed to have gone with plastic bottles as the primary source of soda. The number of bottles was unbelievable, so it’s no wonder why bottle recycling was being promoted. There were plastic bottle recycling setup around the stadium, so that was a positive. However, right next to that was a trash can, where many of the bottles ended up, unfortunately.

During the cleanup process, the trash is swept into the aisle, and then forced into a trash bag. Even with people walking around looking for bottles, there were many of them that still ended up in the trash. Everyone is trying to get the job done, and aren’t spending a lot of time looking to see what can be pulled out for recycling. 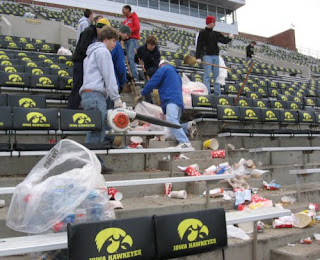 The other surprise was the amount of aluminum cans that were present. First of all, these items are not actually sold in the stadium, so they must be “smuggled” in by the fans. What is amazing is that Iowa has a 5 cent deposit on aluminum cans, so the fact that no one had picked up these cans yet was hard to believe. I bet there was $20 worth of aluminum cans laying around. If you want to make some quick money, hang out after the next Iowa game next fall.

Here is a picture of the main items that were left behind after the game. 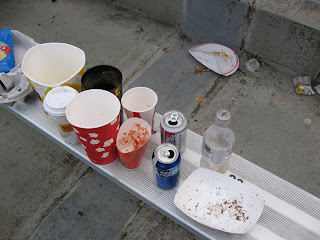 In summary, there were:

So what do I plan to recommend, and help implement at Kinnick Stadium next year? A three pronged attack is probably the best option.

I’ll keep you posted on my efforts. Next time you’re at a sporting event, look around and see what improvements can be made to make recycling easier, and let the team know about it!

Get Earth Belt certified for FREE!

"Manufacturers in every industry have a big responsibility to fulfill in ensuring a sound environment for future generations. Along with preventing pollution and other overt damage to the environment, they need to conserve resources by using material and energy efficiently. The Toyota Production System is a framework for conserving resources by eliminating waste. People who participate in the system learn to identify expenditures of material, effort, and time that do not generate value for customers."
- Toyota Production System booklet, 1998